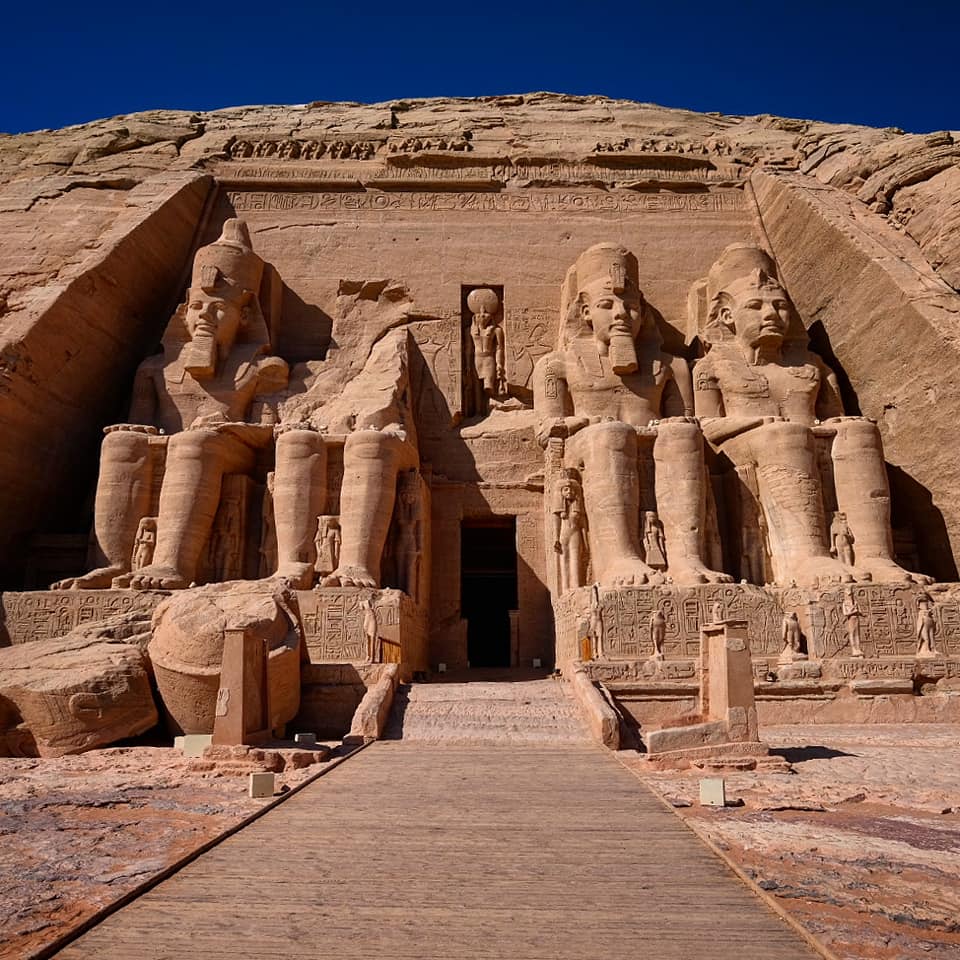 Three hundred and twenty kilometers from Aswan in Nubia is to be found Abu Simbel the most beautiful and imaginative con­struction of the greatest and most whimsical pharaoh in Egyptian history. This temple is dedicated in theory to Amen-Ra, Harmakis and Ptah but in practice it was con­structed for the greater glory of its builder, Ramses the Great (Ramses II).

To the Pharaoh’s architects the tqmple represented a tremendous challenge which, two thousand years later, was to be taken up again by the engineers of the world community in order to save it from the waters of the Nile. In this lonely place lost in the middle of the Nubian desert the temple, which is 38 meters wide by 65 meters long, had been carved out of a single piece of rock. The un­usual facade was carved by a «multitude of workmen whose swords had led them to prison» working under the direction of the chief mason. The facade consists of four colossal statues of the Pharaoh seated on his throne. Each statue is twenty meters high, measures four meters from ear to ear and one meter along the line of the lips. The statues are not only symbols of the attributes of Ramses but are also functional be-

ing the columns which support the facade, some 31 meters high. The work of the stone-cutters and sculptors was followed by that of the painters which at the time of its execution _ was remarkable for its wide range of colour but which unfortunately has been completely destroyed by the passage of time. Penetrating into the heart of the mountain one reaches the sanctuary where formerly there stood statues of the triad to whom the temple was dedicated together with one of Ramses himself. It was here that what was called the «miracle of the sun» took place. Twice a year, on 21th March and 21th September, at 5.58 am, a ray of sunlight would penetrate the sixty five meters between the entrance and the shrine and bathes Amon-Ra and Ramses II in light. A few minutes later the ray would move on and fall on Harmakis. Af­ter about twenty minutes the light disappeared and it is really quite remarkable that the rays of light never struck Ptah, for Ptah is in fact the god of darkness. The temple wall decorations celeb­rate the military grandeur of Ramses II. The poet Pentaur, serv­ing at the court of the great Pharaoh, composed a long epic poem on the expedition of Ramses the Great in Syria. The poem, written in hieroglyphics, is en­graved not only here at Abu Sim-bel, but also on the walls of other gigantic temples, such as those at Karnak and Luxor. During the long wars waged against the Hatti, a belligerent Syrian tribe which had formed alliances with several of the neighboring populations, Pharaoh Ramses II gave his troops proof of rare martial valour. In the fifth year of his reign the Pharaoh, at the head of his army, advanced against the city of Atech or Quothshou, the ancient Emesus, to the northwest of Tripoli. Betrayed by false refugees (Be­douin spies in the pay of the king of the Hatti), Pharaoh fell into an ambush and was suddenly sur­rounded by enemy troops. Ramses found himself alone with his per­sonal guard, consisting of seventy-five war chariots, against an enemy possessing more than two thousand.