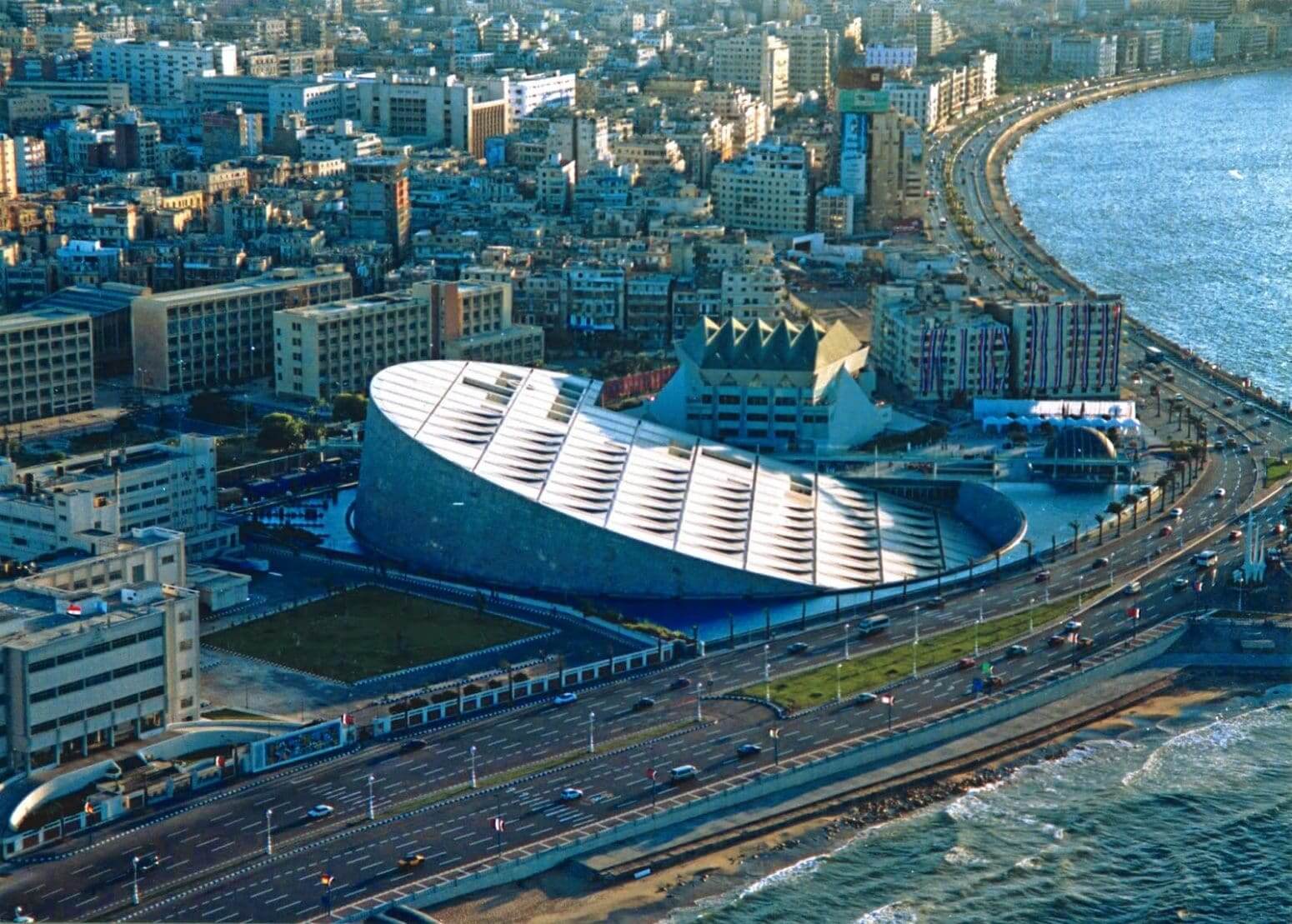 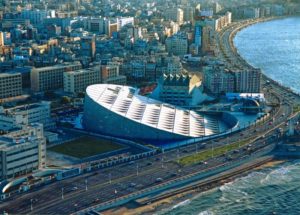 Alexandrina Bibliotheca is one of the most famous bookstores in the region and the world, and has been famous throughout history with names including the Great Library, the Royal Library of Alexandria was built by Alexander the Great, which was included in the planning of the city of Alexandria when he built the city , but others thought the first one to build the library was Ptolemy I, and some said that the credit of the establishment back to Ptolemy II since he completed the construction of the building after Ptolemy I era who gave order to build it according to historical narrations.This library is one of the oldest governmental libraries in the whole world , the value of the library has increased since it contained books which contains knowledge from various parts of the globe.

This library served as a link between Eastern and Western cultures, and all those who studied and sponsored it were required to leave a copy of their works. This has enriched the library with many important writings. The library had more than seven hundred books. At the same time This has helped the developers to develop them significantly, which has reflected on the library itself. Many librarians served the library, including Valery in 284 BC and Kalimachos Al-Barqawi, Al-Roudisi, Eratostasis Al-Barqawi, Byzantine and many others. Where they received their tasks for a considerable period of time. The idea of reviving the library was first raised in the late eighties when UNESCO invited to contribute to the revival of the library. The UNESCO proposed an international competition to design the library. the first prize was awarded to Snoita company located in Oslo Norway.The design of the new library includes four levels under The ground and six upper floors of the highest point of the ring surface, a skydome was established near the library along with a scientific museum.

The most important feature of the Alexandrina Bibliotheca is the architectural style in which the library was built. It was executed by the Norwegian engineer Sutia. The office of Dr Mamdouh Hamza was responsible for the foundations and the soil along with the genius departed Egyptian engineer Ahmed Meto. The library is located 40 meters from the beach.The library is built on an area of 85405 thousand square meters, 22 meters high and the building consists of 11 floors, including four floors under the ground and a ground floor and six floors above the ground at an angle of 16 degrees and the space of the reading rooms is twenty thousand square meters as well as the diameter of the circle To its office is 160 meters and stands on 90 columns and the circular building of the library represents the disk of the sun that goes out of water horizon inspired by ancient Egypt, although some say that the round disk refers to the computer tablet with its knowledge. The construction is an unprecedented engineering achievement. The construction works included advanced techniques, in addition to the circular wall made of raw Egyptian granite in which all the languages of the world were inscribed with 6300 letters and a sentence and a symbol by a team of Norwegian sculptors headed by Euronne Sanis, carved in the form of a subversive sculpture, and produced on four thousand pieces of granite extracted in Aswan. The outer surface of the library is designed to allow the natural sunlight to enter the building inside to reduce the cost of industrial lighting as much as possible. The library was officially opened in October 2002. The final cost of the project was about $ 117 million. The main library includes the Youth Library, the Library of the Blind, Planetarium, Science Museum, lines museum,

The Library Museum, the Archaeological Museum, the International Institute, the Alexandria International institute Center and its associated services, as well as multi-purpose spaces and exhibitions. The Library accommodates 8 million folders and includes dramas from 1500 to 4,000, in addition to between 10,000 and 50 a visual and audiovisual means and a number of manuscripts, In addition to the number of ten thousand and fifty thousand visual and audio means and a number of manuscripts, and about ten thousand to fifty thousand books of rare books, and about fifty thousand maps of the universe.The library includes main historical books and contain very rare collections, including a huge and rare collection of the book ”Description of Egypt”, which is in good condition and dates back to 19 BC. In addition to a copy of the manuscripts and documents of the Suez Canal, and a part of the history of the Arab scholars in Andalusia in Arabic, English and French, as well as a selection of books in other European languages such as German, Italian, Spanish and other rare languages such as Creipoli,Haitain and Zulu languages. The current collection includes sources of donors from all over the world on various topics France has presented a gift of up to half a million books in French on several different topics which was the largest cultural deal in the history of libraries . Alexandria Bibliotheca became the second Francophone in the world . After this donation the library has become the main library of the Frech book for in the middle east and the African continent.The Taha Hussein Library represents a new concept that opens new horizons for the blind and enables them to get into different resources and the internet archive and a library for children and youth. The library has more than 7,000 maps covering all parts of the world with a special focus on Alexandria, Egypt, the Arab countries and the countries bordering the Mediterranean Sea. The library includes different types of maps such as city abstraction, world maps, topographic maps, geological maps, contour maps, road and transport maps, thematic maps, marine and aerial navigation maps, and aerial and space imagery. The Library also contains more than 500 atlas, a number of earth balls** and a hall of rare books, including the collection of rare books owned by the Library of Alexandria, which was printed before 1920, in addition to a number of books donated and copies of rare books and limited editions. The manuscripts hall has a collection of rare manuscripts owned by Alexandria Bibliotheca, these were manuscripts of different languages, including Arabic, Turkish and Persian.

The most important collection of the library is a replica of the collected map published by the Iraqi Academy of Sciences in 1951 for maps of the book “The Picture of the Earth” by Sherif Idrissi. It was painted by Idrissi to the king of Cecilia Roger II in the year 1145 . As well as a replica of a manuscript topographical map of the Arabian Gulf and Mesopotamia dating back to the seventeenth century and a museum of monuments within the library. The collection of the museum includes different ages of the Egyptian civilization from the Pharaonic to the Islamic era, passing through the Greek civilization that came to Egypt with the conquest of Alexander the Great.

The museum was designed as a gratitude to the scientists whose work has contributed to the dissemination of scientific knowledge, the centre also contains an exploration hall next to the Planetarium where visitors can interact with various scientific subjects, particularly physics and astronomy. The content of the section was enriched with rare collections of manuscripts and documents (about thirty thousand manuscripts, fifty thousand documents and nine permanent exhibitions: Alexandria through the ages (Mohammed Awad Group) , Shady Abdelsalam world , the wonders of the arabic writing,the History of Printing, The Book of the Artist, the Astronomical and Scientific Instruments of the Arabs in the Middle Ages, Mohieddin Hussein: An Innovative Journey; The Works of the Artist Abdel Salam Eid, The Care Group of the Tiger and Abdul Ghani Abu El Enein .The Alexandria Bibliotheca’s conference center is one of the most modern buildings for the exhibition halls. The library has added seven new libraries to suit all types of people and provide information with all possible ways and means available.

The library is a link between the East and the West, a place where the various human cultures were mixed . The library was exposed to a limited fire back on March 2003.