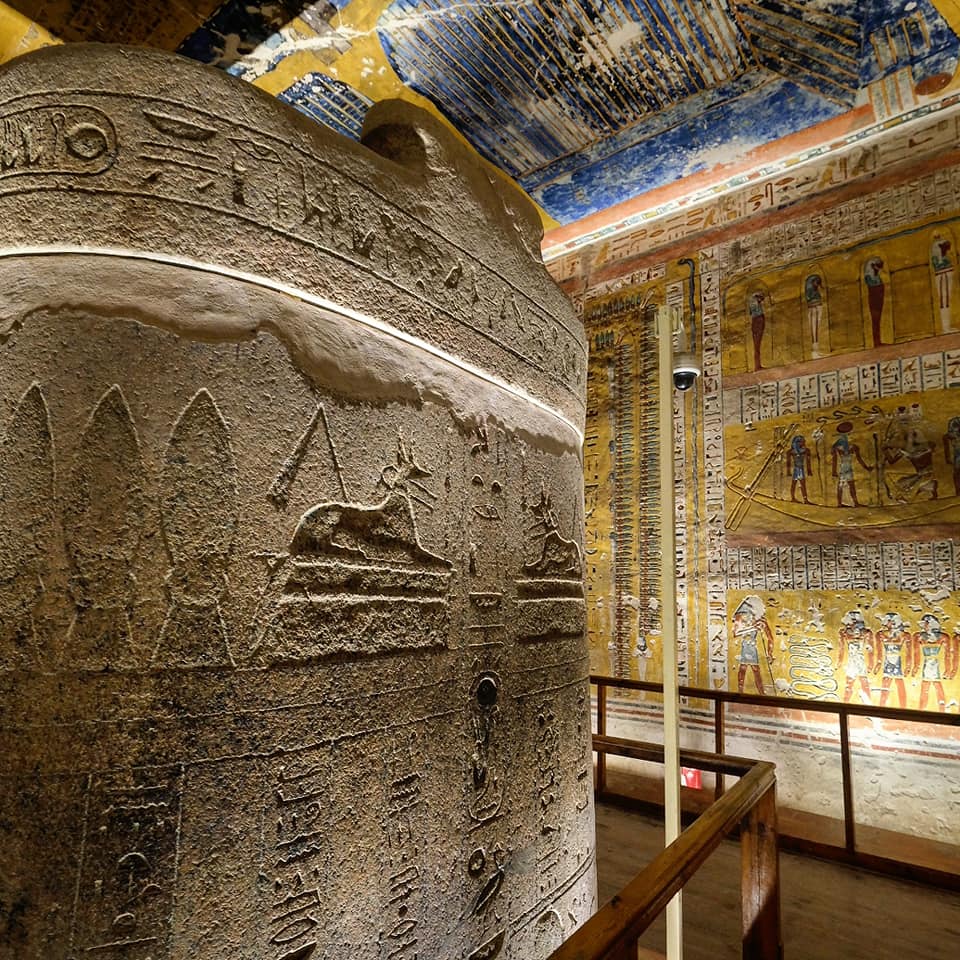 valley so as to be safeguarded against grave robbers. Most important are those of Tutankhamen, Seti I,

Amenhotep II, Thutmose III, Ramses III, Ramses VI and Hormoheb (Only 3 of them will be visited).

The story of the discovery of the tomb of this pharaoh who died when he was barely eighteen years old is too long, too fascinating and too mysterious to be told in its en­tirety here.

It was discovered on 4th November 1922 by Howard Carter (acting on behalf of Lord Carna-von) and it made history because of the enormous amount of treas­ure found in the burial chamber which, fortunately had remained untouched by grave robbers. It is still worthwhile to read Carter’s own account of this historic dis­covery in order to relive day by day, moment by moment its var­ious phases.

Unlike its contents the tomb itself was very modest, perhaps because it was built in great haste as a re­sult of the unexpected death of the king. Inside among all the funeral trimmings the thing which stands out because of its great beauty is the pharaoh’s sarcophagus. It is more correct to say the sacrophagi since the royal corpse was con­tained in three mummy cases: the first of gilded wood, the second also of gilded wood but with the addition of a powdered glass paste while the third is of solid gold. The golden sarcophagus is one of the greatest masterpieces of the goldsmiths’ art of all time; it con­tains two hundred kilos of gold, is one and half meters high and is encrusted with lapis lazzuli, tur­quoises and cornelians. However among all this glitter the thing which made the greatest im­pression on Carter and his party was a little wreath of dried up flowers, a last pathetic gesture from the consort of the boy-pharaoh. Finally let us not forget that in addition to the already romantic story of the discovery it­self there is that obscure business that has come to be known as «the Pharaoh’s curse». The sud­den violent deaths of the majority of those who took part in Lord Carnavon’s expedition, with the exception, strange to say, of Carter himself, lent strength to the belief in a posthumous vendetta by the dead Pharaoh whose eternal sleep had been disturbed. History of course is full of such legends and this one only adds to the fascination of the already fas­cinating romance of Tutankhamen.

Tomb of Seti I

By the complexity of its construction the tomb of Seti I is one of the most noteworthy in the Theban nec­ropolis. It contains numerous flights of stairs and gal­leries leading to rooms supported by pillars. In one of these Giovanni Battista Belzoni discovered the pharaoh’s sarcophagus which is carved out of a single massive block of alabaster. The mummy was not there, it had already been carried away together with others to an unknown common grave.